Why are there so many HOV [High Occupancy Vehicle] lanes being introduced around the country?

Well, first off the federal mafia government prints money out of thin air then gives the states to construct them. This is all the more reason and proof big government does not work unless your definition of “work” means control.

Lets face it, HOV lanes have failed because they were never intended to work. How often are you stuck in stand still traffic and the HOV lane is wide open? It’s complete garbage and a waste of money. It about control and getting you use to giving in because the toll roads are coming. They steal your roads and now want to charge you to drive on them. 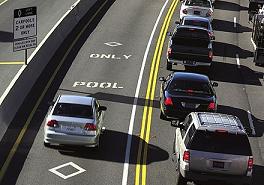 HOV lanes are constructed to steal your roadway that you paid for and hand it over to a special class of people…i.e. judges, cops, lawyers, or if you drive a car some ignorant bureaucrat decided was worthy enough to grace its tires on the asphalt.

Furthermore they use HOV lanes as a revenue source with huge fines if you are caught on their sacred road. The highway mafia errrr I mean DPS hangs out in the far left lane and waits for on coming cars to drive by with only 1 occupant and like a snake bam. It a trap, a fraud and its gonna stop!

This entry was posted on Thursday, September 10th, 2009 at 3:10 am and is filed under Uncategorized. You can follow any responses to this entry through the RSS 2.0 feed. You can leave a response, or trackback from your own site.

6 Responses to HOV lanes are FRAUD